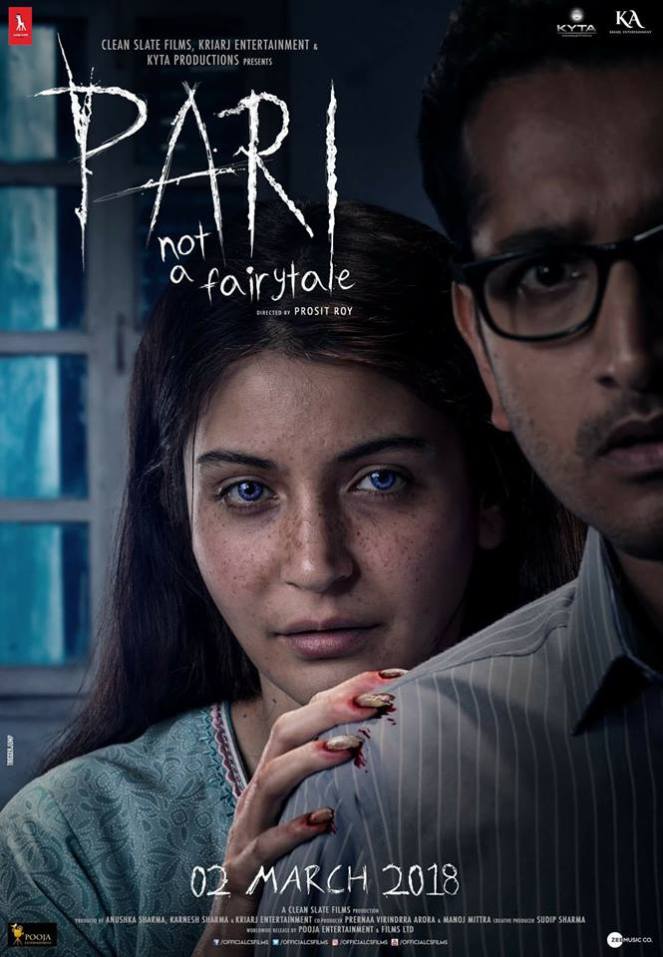 The devil is in the detail: a simple story is fairly layered in the way it is told. Prosit Roy’s Pari is definitely not a fairytale. In fact, it is scary, gruesome and quite confronting to watch in parts. Yet I left the theatre with a fuzzy feeling after an evocative, emotional climax and post script. As if it is possible to scrape through muddy waters and find a lotus. That love is still that one thing that can save us.

The movie gently leads the audience in with the first scene before hurling us to the dark side in the next. We see boy Rajat (Parambrata Chattopadhyay) meeting girl Piyali (Ritabhari Chakraborty). Right after, the mood for horror is set with torrential rain resulting in a car accident. It makes Parambrata feel guilty and responsible for the dead woman’s daughter Ruksana (Anushka Sharma) who comes with her own demons and battles. An evil professor (Rajat Kapoor) lurks around, waiting to get his hands on her for his own reasons. Giving away any more of the scenes or story would take away from the movie. Rest assured, there is plenty of meat *cough* to stay hooked.

I am usually not a big fan of horror genre as I find it repetitive and mindless. However, Abhishek Banerjee and Prosit Roy’s story unfolds softly yet brutally to create a fine, taut drama with a purpose. I’d love to watch it again for its finesse and gripping narrative. I loved how the duo weave the supernatural element with the same sensibility as the mundane happenings on screen. Although it is not at all easy to watch those parts, Anushka’s character is shown living her fate without any major attempt to judge her or delve into why she does some of the things shown. Ditto with the rituals. In a crucial moment, Ritabhari tells Parambrata there is a devil in all of us. And you realise that at one point, there is no difference between good and bad when fear takes over.

The team is in great form overall, with top-notch production values (unlike the ridiculous climax of Phillauri). Anupam Roy creates two haunting tracks which merge beautifully with Ketan Sodha’s scary background score. Meenal Agarwal’s production design is stunning. It sets the right tone for Jishnu Bhattacharjee’s cinematography which is impeccably moody, classy and consistent despite the ugly material. Especially how he shoots the scenes in the dark forest and Arnab’s creaky apartment. Not to forget the classic bylanes and dilapidated buildings of Kolkata. Manas Mittal’s excellent editing is languid in parts and racy in others for the right reasons.

The performances rock, including the wonderfully charged women who gamely play the ghosts.

Ritabhari is effective and makes her mark in the pre-climax scene. Creepy as hell, Rajat Kapoor give us the chills with a masterful performance.
The gentle Parambrata returns and is in superb form after his last memorable outing in Kahaani (2012) and a few lesser known Hindi movies in between. As a shy guy caught in an extraordinary situation, he aces it. And may I respectfully say, also adds a bit of eye candy despite his on-screen dilemmas.

I love how Anushka is experimenting with her home productions and this is the second one she has got pat right after NH10. Although Phillauri was good and she did well, I like her kickass avatars where she gets physical and pushes boundaries.

With Pari, she owns Ruksana right from the moment she appears on screen. She hardly smiles, her identity peels off slowly but surely. Only a consummate performer could have handled the visual yet visceral shades that are part of her character. Without a doubt, this is a hallmark performance. The last scene beautifully sums up her tragic existence, resting on just two precise expressions she gives.

I am going for a high 5 just because Pari was a horror movie that also made me think. I am not sure whether it was intended but I also saw Anushka’s character as a woman who not only breaks her shackles after years of confinement and finds her own identity but also faces her flaws and finds her peace.

One thought on “Pari: Date With The Devil”