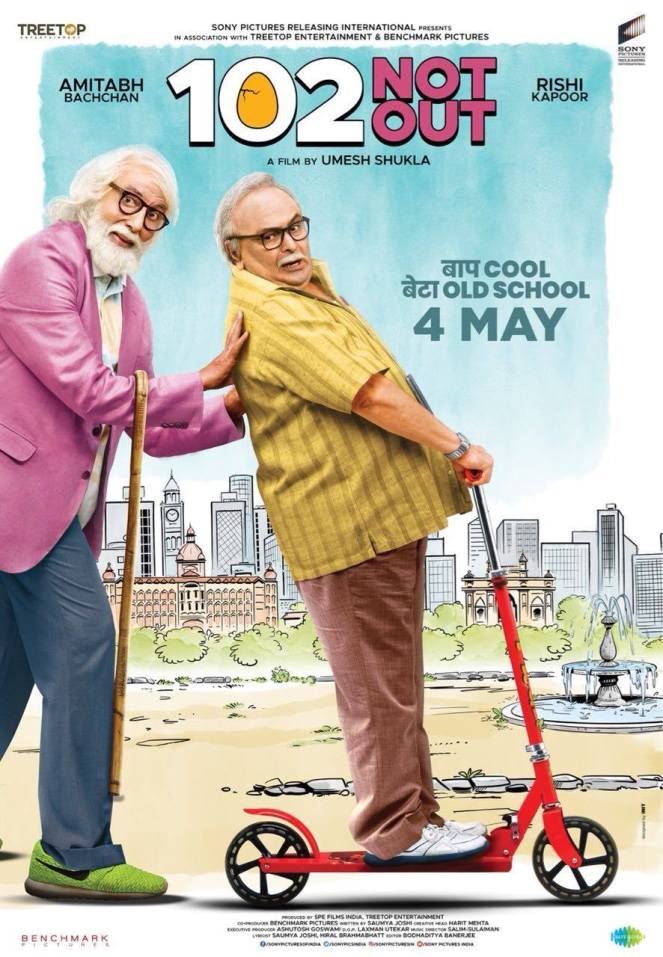 At long last, a pair of old men share the driving seat in an emotional movie ride. Statistics tell us that women outlive men in their lifespans. But what happens when their partners perish earlier and men are left alone in the empty nest?

With 102 Not Out, director Umesh Shukla makes a gentle and entertaining attempt to find out. He seems to have a thing for socially relevant subjects, with his earlier religious satire Oh My God! and the family comedy All Is Well. We need more movies like these that can lead the way for us to change seniors’ conversations in society. This time, he rightly does away with the female lead to adapt writer Saumya Joshi’s play for the big screen.

The result is 75-year-old Babulal Vakharia (Rishi Kapoor), a crabby old character quite opposite to Rishi’s colourful 90-year-old daada in Kapoor & Sons (2016). Babu loves his little routine more than fun and cruises along just fine in the comfort of his predictability. He is introduced to us in a shower – water washing over his head as he stands listless and weary. We soon learn that he must finish in 14 minutes, in case he gets a cold at the mark of 15. He must switch off the geyser, visit the doctor, uses the same blanket he has slept with for years…and so the list goes on.

It is obvious that he has given up on life and expects no surprises. A lot of people in that age category do. As lonely parents, they are left to pick up the remnants of their children’s childhoods and sacrifice their old age support to flights of success. Life becomes about surviving rather than living. In this day and age, however, is it time for that conversation to change? Perhaps parents must learn to still find some meaning in a fragmented world when their children chase ambition and money? Perhaps children must strive to stay connected with their folks even if they live in a different continent?

Back to sad man Babu then, who lives with his sprightly 102-year-old father, Dattatraya Vakharia (Amitabh Bachchan) in their family home. Much to his annoyance, he loves life more than him. After being at loggerheads, they have managed to establish separate lives in the same house.

Babu’s anxiety amplifies when Datta wants to shake things up, including his regime, and threatens to send him to an old age home unless he mends his ways. Datta’s threats in the form of conditions force a reluctant Babu out, and about. Witness, assistant, and in-charge of the project is Dhiru (Jimit Trivedi), a kindly young guy who delivers them their medicines and some daily amusement.

The idea is for Babu to rekindle his emotions so that he can learn to deal with them. The parts where Babu tackles his challenges after Datta’s little pokes are done wonderfully. I wish they were explored in more depth as well as length. Some of them end up being touch-and-go in terms of the execution. Others are a tad predictable especially when Datta delves into the past narrative.

There is enough substance to keep you hooked. Some of the later scenes are done well, especially the Waqt Ne Kiya sequence. Amit and Rishi make a good father and son duo, lovely to watch them recreate their Chal Chal Mere Bhai magic. Datta is an entertaining character who has made it to 102 in good shape and only wants his son to take care of himself in body and spirit. Watching him laugh and care as he slowly brings his son out of his dark space, is endearing. A celebratory dance and song between the pair is in order, and it’s heartening to watch them find their spark again. Love is about who is in your life to share your steps, and not about who isn’t.

Amitabh Bachchan plays Datta with a delicious vengeance and without any trace of the angry man voice in this performance. In its place is a softness and sweetness, almost reminiscent of his character Sukumar Sinha in Chupke Chupke. He gracefully supports Rishi, stepping back from the limelight.

If there was ever a doubt, let it be said that Rishi has always been a cut above the rest when it comes to his acting craft. Babu is even more adorable with him at the helm and Rishi plays him with the quietest of dignity, humour and grace. Of course, he is armed with an array of sparkling and funny expressions he seems to have in his kitty. He steals the scene with an effortless act. More of him in such roles, please.

Like a good film does, 102 Not Out makes you think but doesn’t necessarily have the answers to the pertinent questions it raises. It digs in a little but stays mostly on surface. A neatly wrapped package and spirited entertainment, which leaves us with a little hope and some smiles.